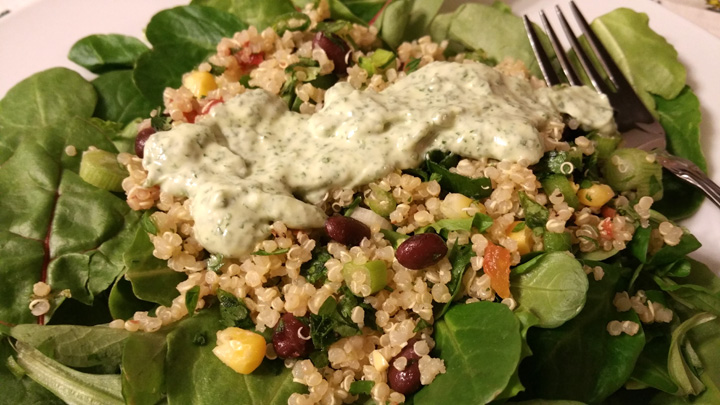 I was in one such small restaurant when I had one of the most delicious salads I’ve ever had…a veggie quinoa salad with creamy cilantro-lime dressing.  For me, veggies aren’t usually something I rave about – they’re usually something I have to tolerate. But this salad was so good, I actually started craving it!

Unfortunately, the restaurant is a bit of a drive from where I live, so it’s not always convenient for me to run out and grab a bite whenever I get another craving. So, I figured out how to make it myself. Of course, the experience (and taste) of dining on this healthy-yet-delicious salad is better while sitting in their comfy dining room. But when I can’t go there, I can still enjoy this healthy meal at home.

There are a lot of ingredients, and it takes some time to make. But this recipe makes a lot, so you can enjoy it for several days. And, if you run out of salad greens (which I do frequently), the quinoa mix is great as a side dish – or as a meal in itself. 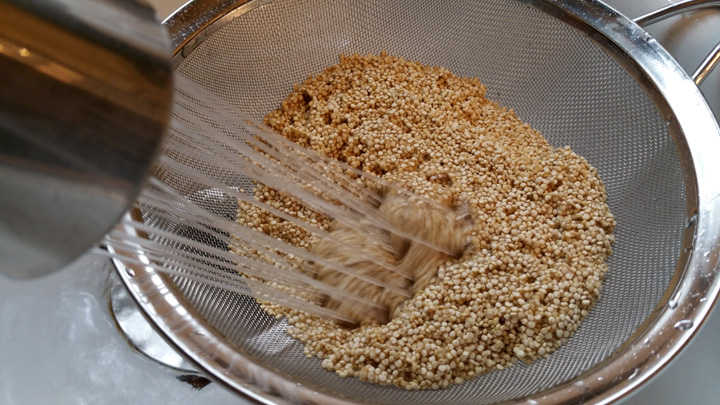 Start by rinsing your quinoa in a fine mesh strainer. Quinoa usually has a fine, naturally-occuring coating. It’s the seed’s defense mechanism to keep pests from munching on it. It won’t hurt you if you eat it, but it tastes bitter. So, give your quinoa a good rinse for a minute or two under cold water to rinse off that coating. Even if the package says it’s pre-rinsed, give it a good rinse anyway. 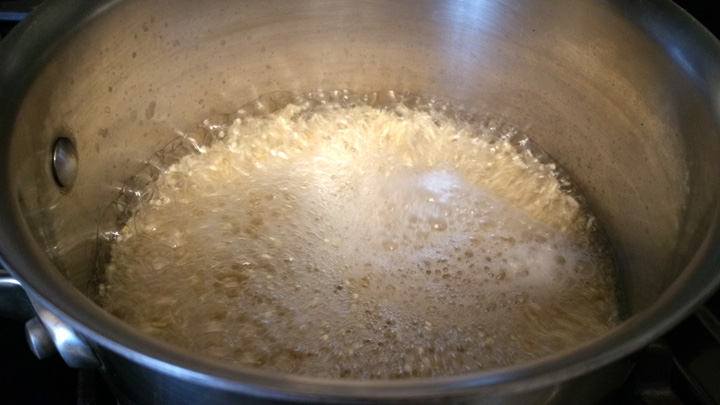 Quinoa is much like rice in that it takes a 1-to-2 ratio – 1 cup of quinoa to 2 cups of water. Place the rinsed quinoa into a medium sauce pan with 2 cups of water. Bring it to a boil, then reduce it to a simmer, cover, and simmer for 15 minutes. 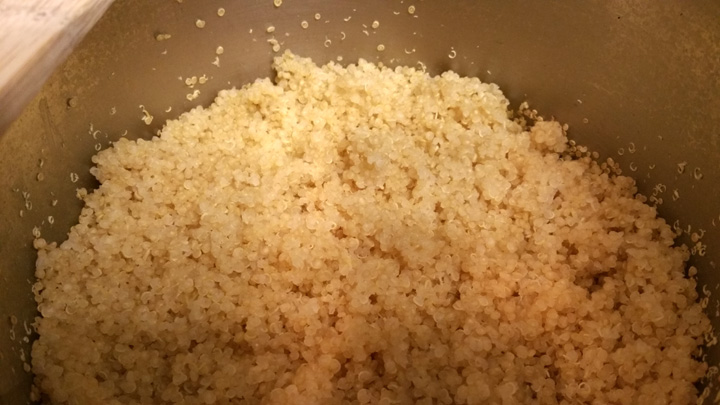 After 15 minutes, the quinoa will be fluffy and you’ll be able to see the little germ of the seed that separates in the cooking process. 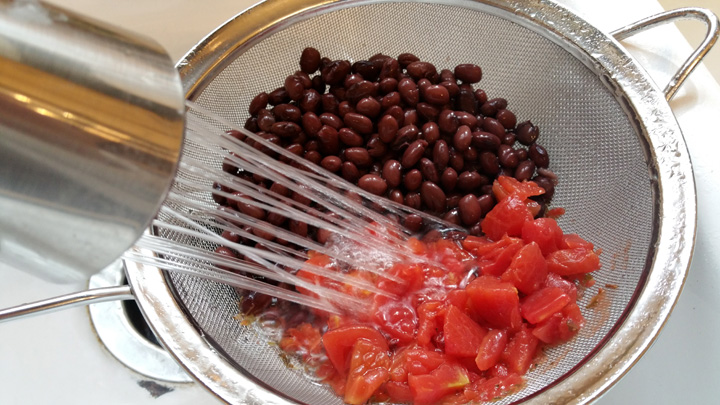 While the quinoa is cooking, place the beans and tomatoes into a fine mesh strainer and rinse them off. The beans are usually coated a gloopy sauce, and the tomatoes are usually in acidic water, so I give both a good showering. 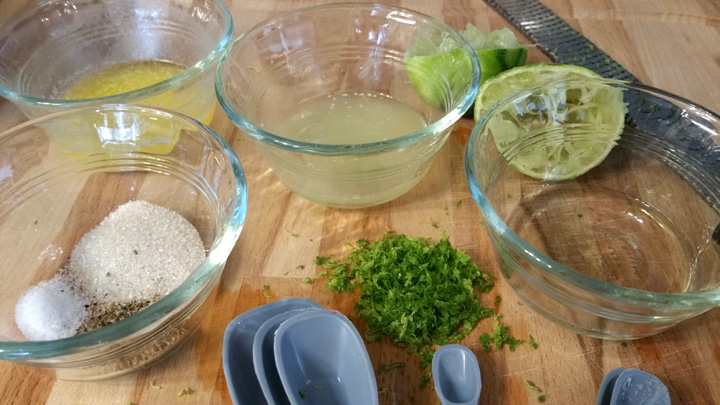 Gather the lime zest and juice, melted butter, oil, sugar, salt, and pepper. These will be the dressing for your quinoa. (Not to be confused with the dressing for the salad.) Quinoa has a nutty flavor, but other than that it can be a bit bland. So this dressing will help give the quinoa some extra delicious flavor. 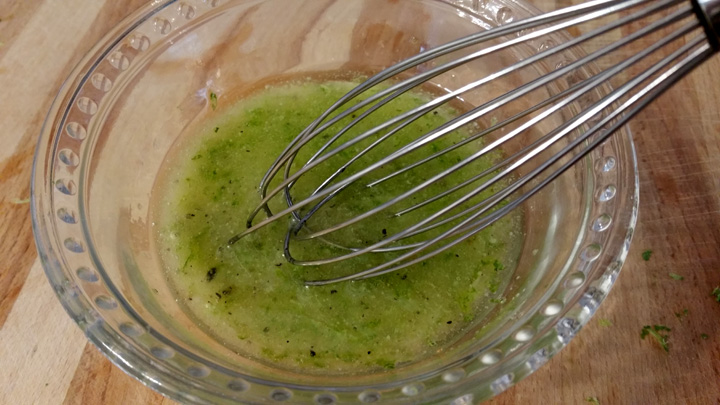 Combine the ingredients in a small bowl and whisk to combine, then set it aside. 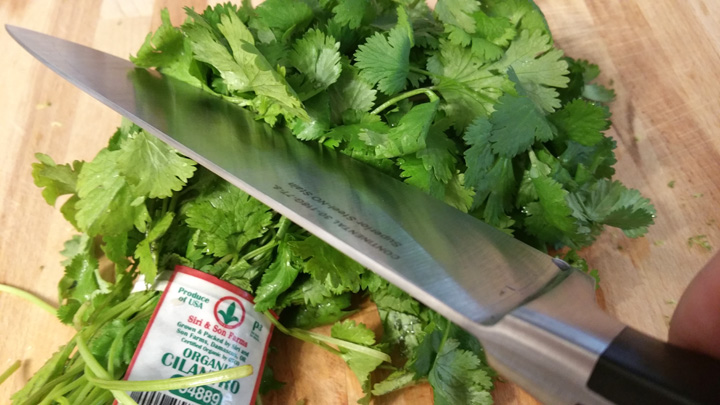 To chop cilantro, just place the knife above the band that’s holding it together and shave off the good leafy bits and thin stems. The thin stems are tender and can be used. The thick stems where the band holds the bunch together are usually too woody for me.

A note on cilantro: I love cilantro. But I recently learned that roughly 10% of the population (estimates are anywhere from 4 to 14 percent) are genetically unable to enjoy the taste of cilantro. Their tastebuds interpret the taste as something close to soap. So, if you’re one of those unlucky minority, you can substitue flat-leafed parsley for the cilantro. It won’t taste the same, but it won’t taste like soap, either. 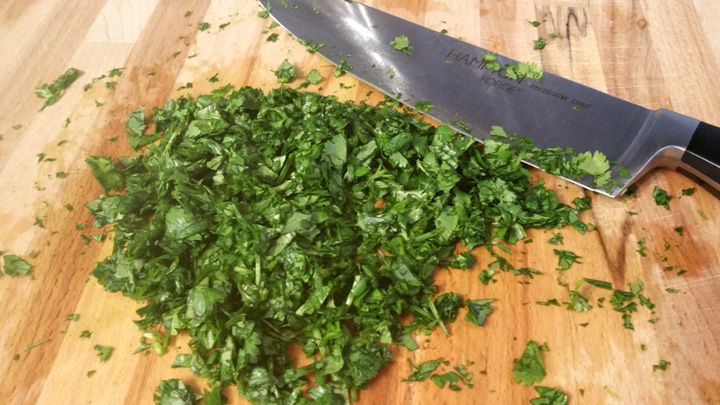 Chop the cilantro very finely. I love cilantro, but I want it to blend in with the other flavors, so I chop it very small. 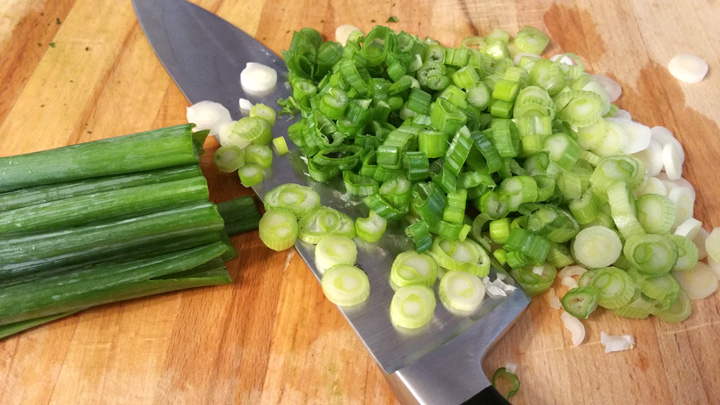 Chop the four scallions very thinly. Again, I want the flavors to meld – I don’t want to bite down into a big piece of onion. I really like the green part of the scallions, too. It has a very mild onion flavor. So, the only parts of the scallions I don’t use are 2-3 inches of the very top, which can be a bit tough. 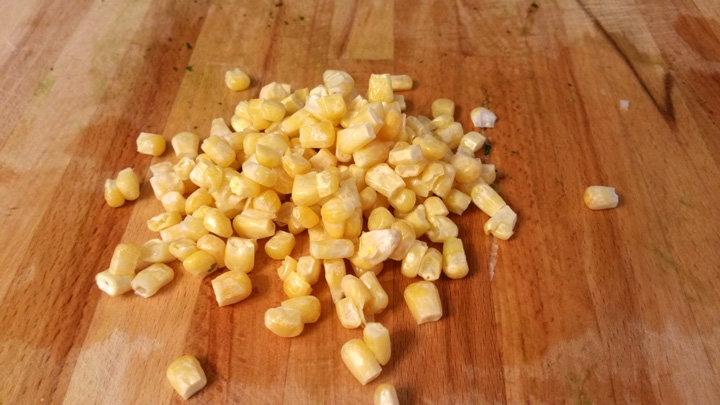 I just use frozen corn. No need to heat or thaw. It will thaw quickly on it’s own. Just measure it out and throw it in. 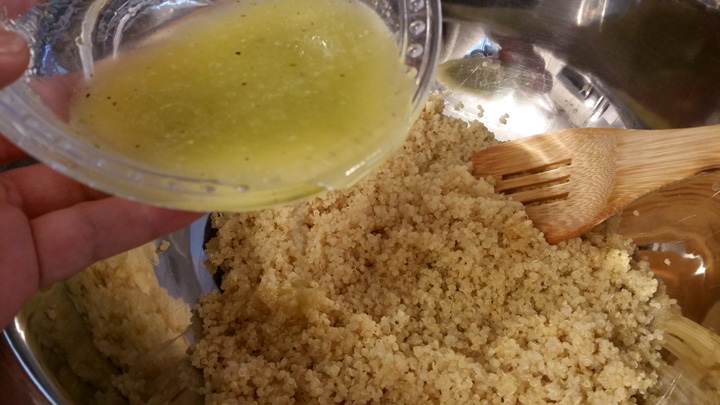 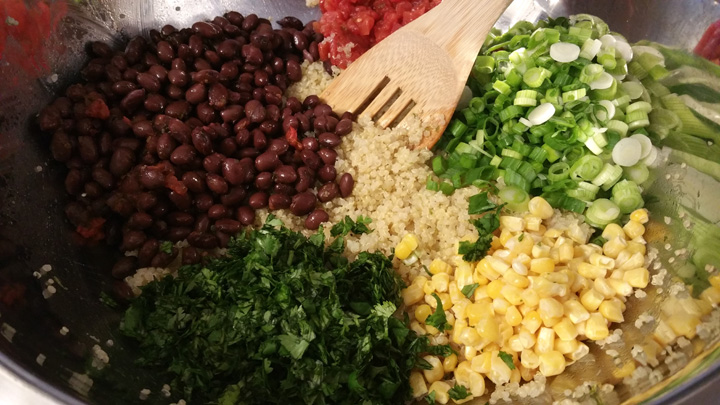 Add the rest of the veggies.

Just look at all those colors! Isn’t it beautiful! I love beautiful food, and the colors in this dish are gorgeous. 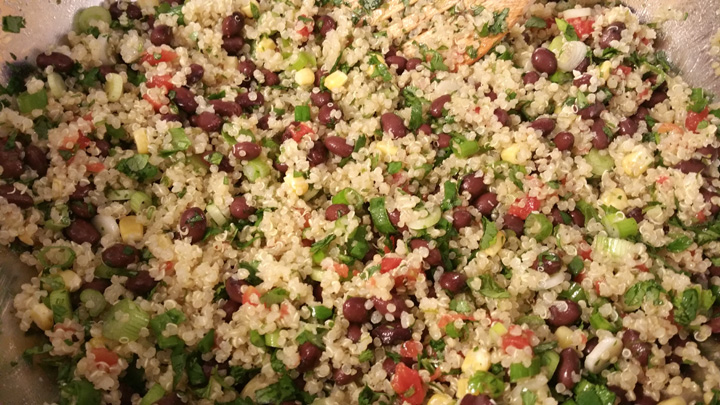 Mix the veggies and quinoa until everything is evenly mixed. At this point, you can package this quinoa mix into a refrigerator container and chill it until you’re ready to eat. 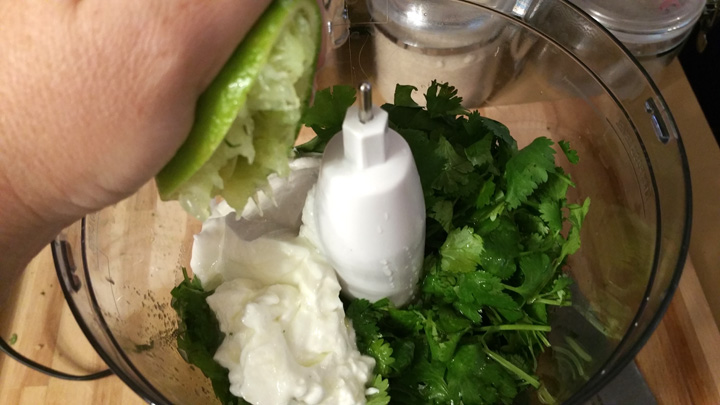 For the creamy cilantro-lime dressing, roughly chop one bunch of cilantro, then pace the cilantro, yogurt, mayonnaise, olive oil, and salt into a food processor. Squeeze in the juice of one lime. 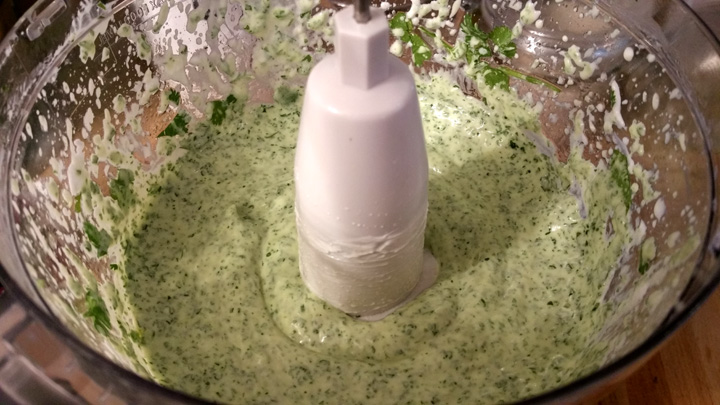 Process until the cilantro is very fine, and the dressing is creamy. If it’s too thick, add a few tablespoons of milk until it reaches your desired consistency. This dressing is meant to be a bit on thick side, so don’t thin it out too much.

On a bed of baby greens, place 1/4 to 1/2 cup of the quinoa mixture, and top with the dressing. I dare you not to eat this every day. Luckily, this is a healthy craving I can indulge without hesitation.