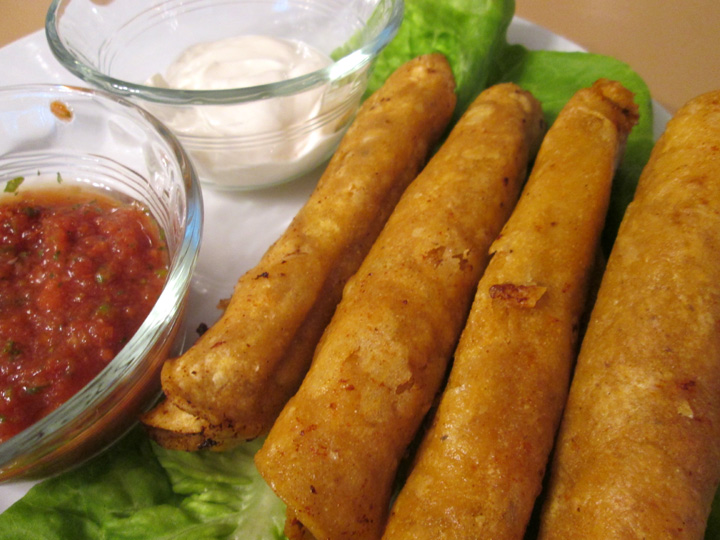 Last week I made Meat & Cheese Turnovers using some ground beef I found in my freezer. But I only used about 1/3 of the meat and cheese mixture. And, since I cannot stand wasting food, I was determined to find a way to use the remaining meat mix, and use it in such a way that I could freeze individual portions for future use.

The first thing that came to my mind was taquitos. I used to work in a Mexican restaurant when I was in school, and that’s where I discovered the humble taquito. Usually relegated to the realm of appetizer, in my opinion the taquito is one of the most underrated of all Mexican foods, and is perfect for a light lunch or dinner. They take a little bit of effort, but once you’re done, you’ll have a stash of taquitos in your freezer, ready to be made whenever you get the craving.

And bonus – they go perfectly with the salsa I made last week. It’s like I planned it or something. Who’da thunk. 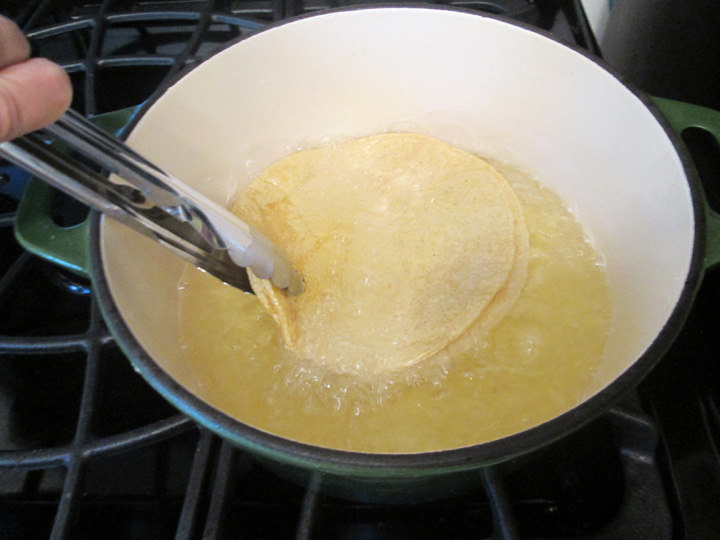 Start with a couple inches of oil in a deep-sided saucepan or Dutch oven. Heat until oil is approximately 350 degrees. If you don’t have a thermometer, you can place a wooden spoon into the hot oil. If bubbles come up from the spoon, the oil is hot enough.

Using tongs, insert three corn tortillas at a time into the hot oil, moving them around a bit while holding them with the tongs to ensure the oil gets between all layers. They should only be in the oil about 5 seconds. You’re just trying to soften the tortillas, not get them crispy. 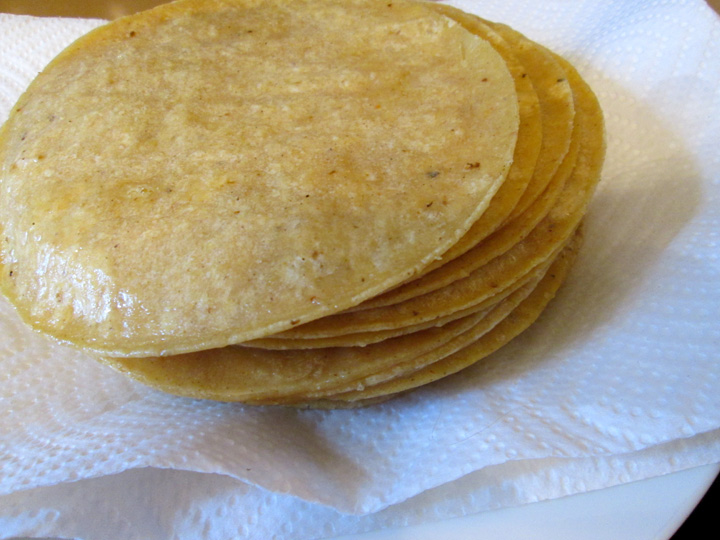 After you dunk and swish each set of three tortillas, place them on a paper-lined plate to cool. You should end with a stack of soft, but not crisp, tortillas. 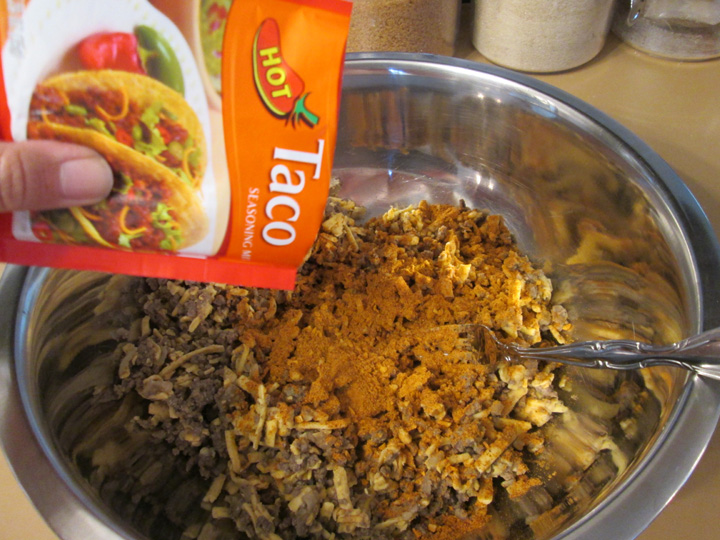 While the tortillas are cooling a bit, add a packet of your favorite taco seasoning to the remaining meat and cheese mixture and stir until distributed evenly. I like things a little on the spicy side, so I used the hot variety. But you can use the regular variety, or create your own taco seasoning mix. 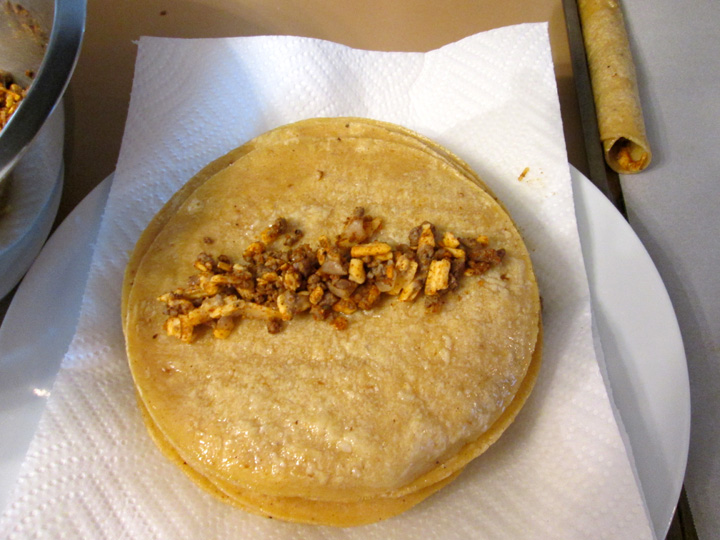 Set up an assembly station with the meat mixture, the soft tortillas, and a parchment-lined baking sheet. Scoop a generous rounded tablespoon full of meat mixture onto the top tortilla and spread it out into a consistent line. 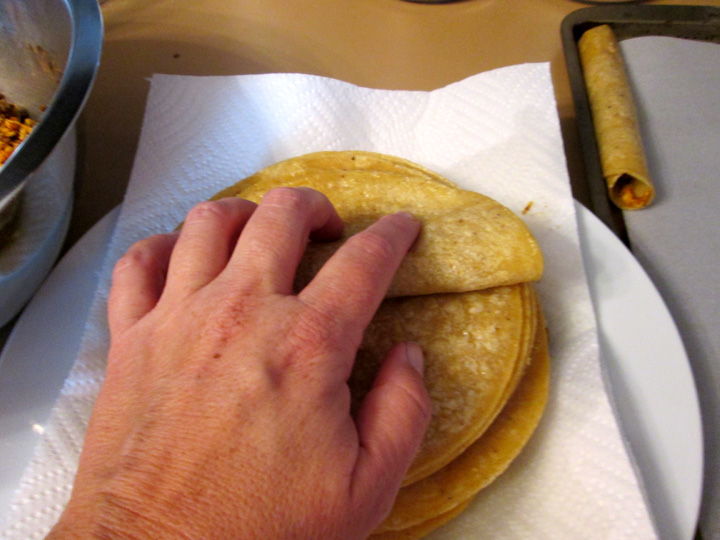 Pull the bottom of the tortilla up to the top. 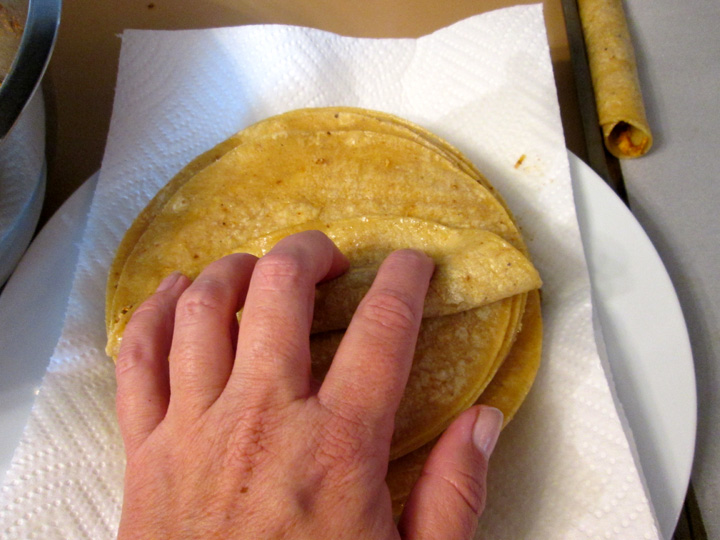 Then, gather and shape the filling into a tight roll by pulling down on the tortilla. 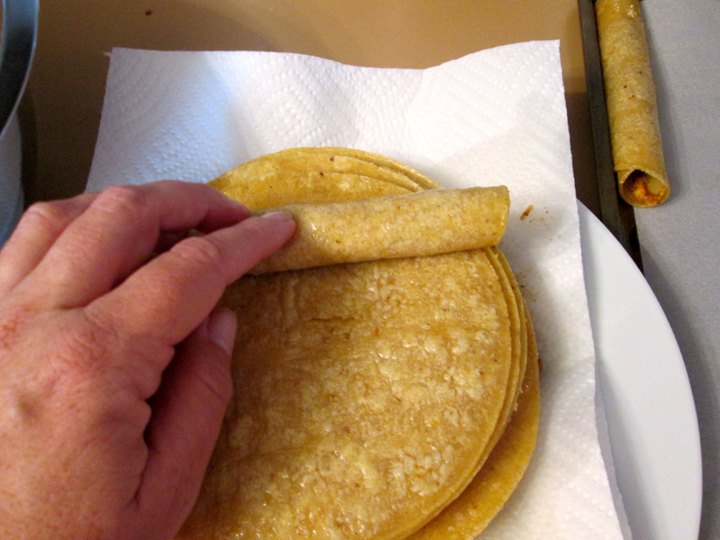 Keeping the tortilla tight around the filling, roll it up like a cigar. 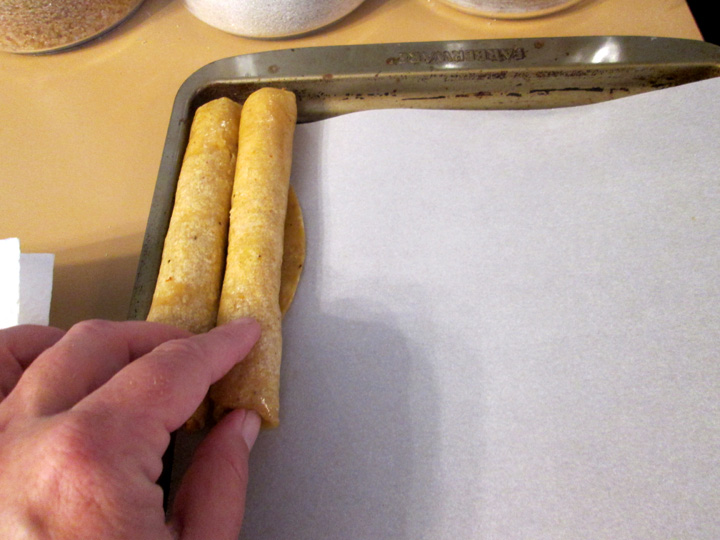 Place the taquito seam side down on a parchment-lined baking sheet. 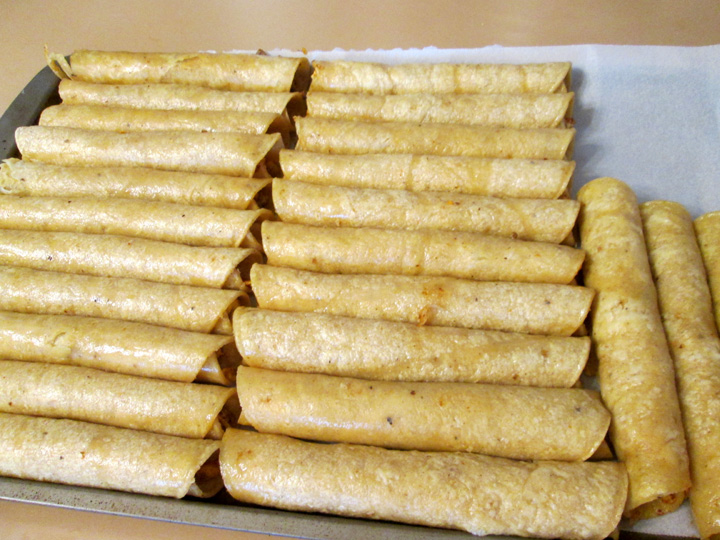 Continue rolling each tortilla and placing each taquito on the baking sheet. You should have enough to make 24 taquitos.

Place the tray in the freezer for 1-2 hours until mostly frozen. Then they may be removed from the tray and placed in a zip-top freezer bag and kept until you’re ready to use them. 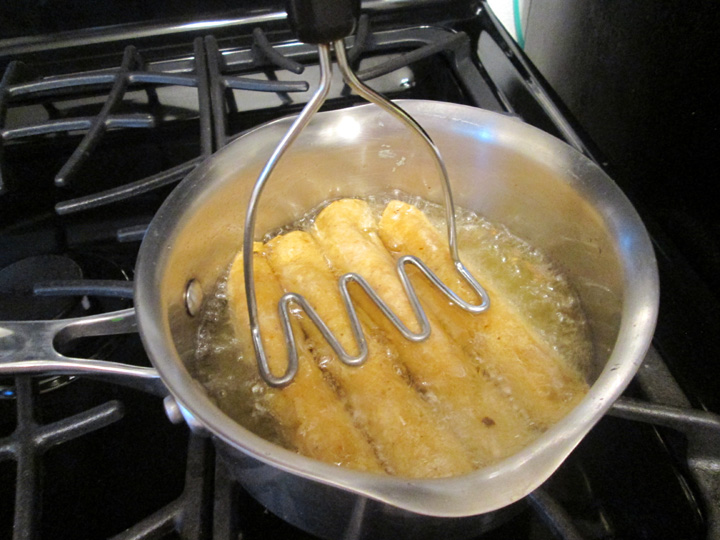 When you’re ready to eat, place about an inch of oil in a deep-sided sauce pan and heat until about 350 degrees. Use an oil made for high heat. Peanut oil is a great choice, but there are also high heat sunflower and canola oils available as well.

Carefully place your taquitos into the oil seam side down. If I’m making a meal, I usually eat 3-4 taquitos at a time. To start, I usually hold a metal potato masher on top of the taquitos until they’re set to make sure they don’t unroll in the oil. Cook for 2-3 minutes (or until golden brown), then flip each taquito to cook the other side. 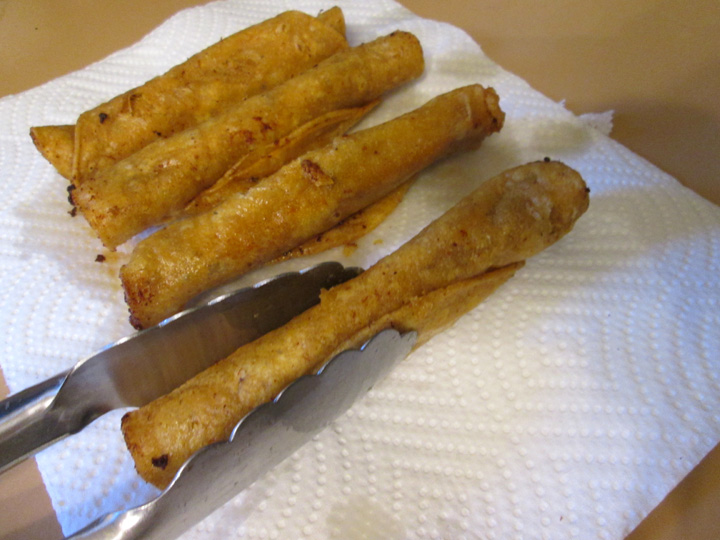 When done, remove the taquitos from the oil and place on paper towels to drain. Serve with sour cream, guacamole, and my favorite salsa.

Instructions
1) Heat about two inches of oil in a tall-sided pan or Dutch oven.
2) Using tongs, dunk and swish three tortillas at a time for about five seconds until tortillas are very pliable. Be careful not to keep them in the oil too long or they will crisp.
3) Place hot pliable tortillas in a stack to cool.
4) Add one packet of taco seasoning to meat & cheese mixture and stir to distribute evenly.
5) Create an assembly line set-up with the meat mixture, the stack of tortillas, and a parchment lined baking sheet.
6) Place a generous heaping tablespoon of filling onto the top tortilla and spread into a line.
7) Using the bottom half of the tortilla, roll the filling into a tight roll, and roll up the tortilla.
8) Place taquito seam-side down on parchment-lined baking sheet.
9) When all 24 tortillas are filled, rolled, and placed on a baking sheet, place the baking sheet into the freezer for 1-2 hours.
10) When ready to cook, heat about an inch of oil in a high-sided sauce pan to about 350 degrees.
11) Gently place 3-4 frozen taquitos in the oil, seam-side down. Use a metal potato masher, or other metal tool, to hold the taquitos down until they set to ensure tortillas don’t unroll.
12) Drain on paper towels and serve with sour cream, guacamole, and salsa.