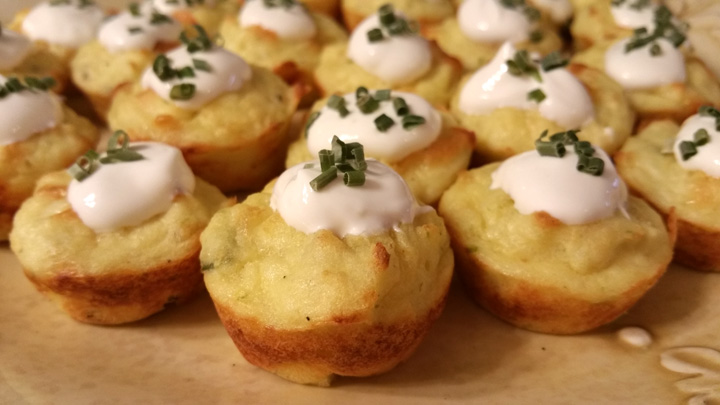 As a single girl, I tend to have a lot of leftovers when I cook.  Even when I’m cooking recipes designed for one or two, I seem to have leftovers.  I don’t know about you, but I hate leftovers.

Turning leftover ingredients into something that has zero resemblance to the original food source is the key.  If you remember, I made a big pot of Colcannon in honor of St. Patrick’s day.  I packed the leftovers into freezer containers and they’ve been in my freezer for the last couple weeks.  I’m hosting a get-together with friends and want to have some yummy munchies to serve, but don’t want to spend a lot of time (or money) on appetizers.  So I’m going to whip up a batch of these amazing savory potato puffs, using some of the leftover Colcannon.  I guarantee they’ll disappear immediately!

I start by letting the leftover Colcannon thaw and come to room temperature.  Cold mashed potatoes tend to be thick and more difficult to incorporate into the other ingredients.

Lightly whisk the eggs, then add sour cream and stir to combine.

Mix the leftover Colcannon into the egg/cheese mixture until thoroughly combined.

Add potato mixture to muffin tins until almost full.  Bake at 400 for 20-30 minutes or until puffs are golden brown and begin to pull away from the sides of the tin.  Serve on a platter topped with a tiny dollop of sour cream and a sprinkling of chives.

And now for the hardest part: Try not to eat them all before your guests arrive.

Directions
1) Let leftover Colcannon come to room temperature.
2) In a large-ish bowl, whisk the eggs.
3) Mix in sour cream until combined.
4) Mix in cheese until evenly distributed.
5) Mix in potatoes until thoroughly combined.
6) Spoon potato mixture into greased mini muffin tins.
7) Bake at 400 degrees for 20-30 minutes, or until the puffs are golden brown and begin to pull away from the sides.
8) Top with sour cream and chives.
9) Serve warm