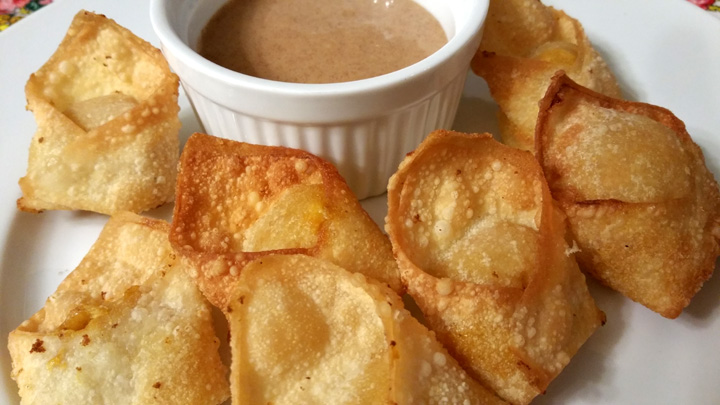 ‘Tis the season for all things pumpkin.  And parties with family and friends.  And food.  What’s not to love?

As a single girl, I rarely have the opportunity to cook Thanksgiving dinner at my house.  I’m usually the one invited to other people’s houses, which means I am relegated to bringing a side dish, or dessert, or bottle of wine.  Sure, I can do the old stand-bye mashed potatoes or pumpkin pie – but sometimes I want to do something a little different.

This article kicks off a series of bite-sized goodness perfect for party appetizers or desserts.  These fun and delicious bites take traditional seasonal foods and turn them into adorable and delectable one-bite variations.

Yes – that’s what I said, you weren’t hallucinating…pumpkin cream cheese wontons with maple cinnamon glaze.  Trust me on this… 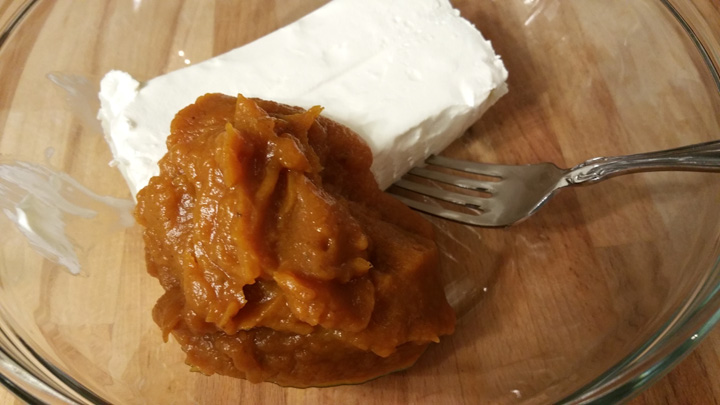 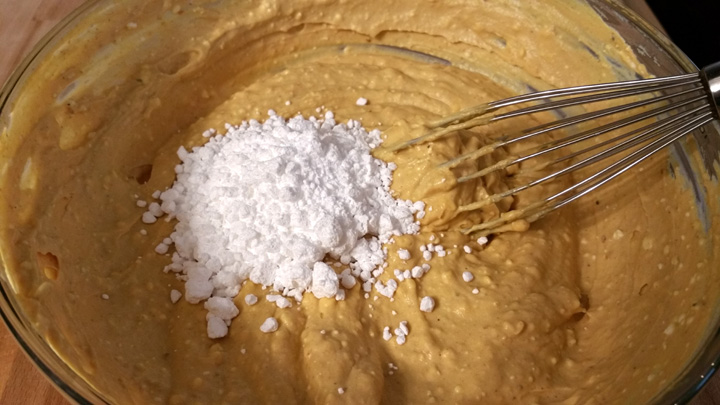 Add the powdered sugar and mix until combined.  The cream cheese is a bit on the tangy side, so you need just a touch of extra sugar to balance it. 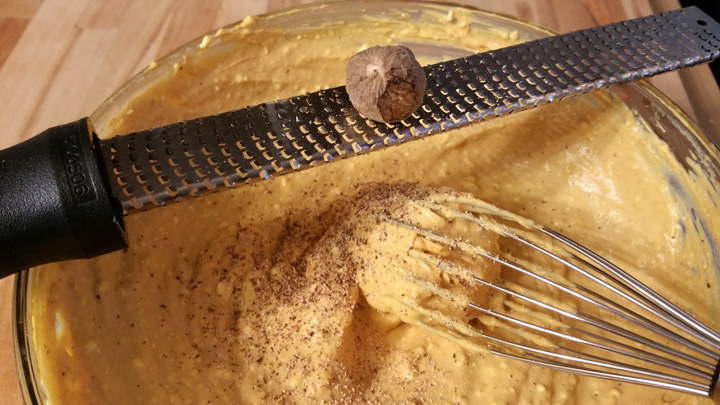 Grate in some fresh nutmeg – about 10 swipes on a rasp.  The pumpkin pie mix already has spices in it, but I love the extra little boost of flavor the fresh nutmeg adds. 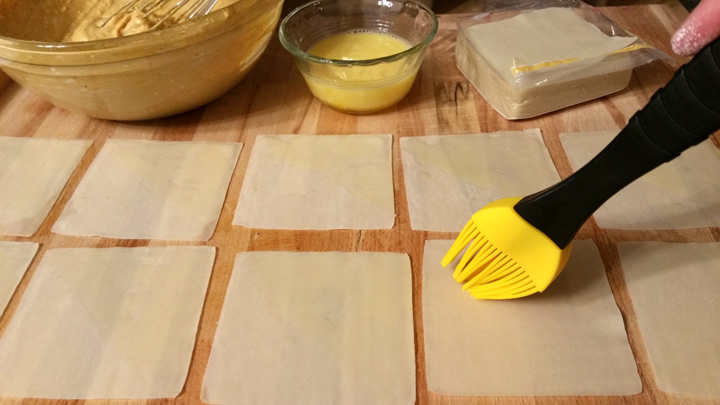 Lay out your wonton wrappers and brush one corner with the egg wash.  (Egg wash is just one egg beaten with a couple tablespoons of water or milk or cream.  In this case, I used water.) 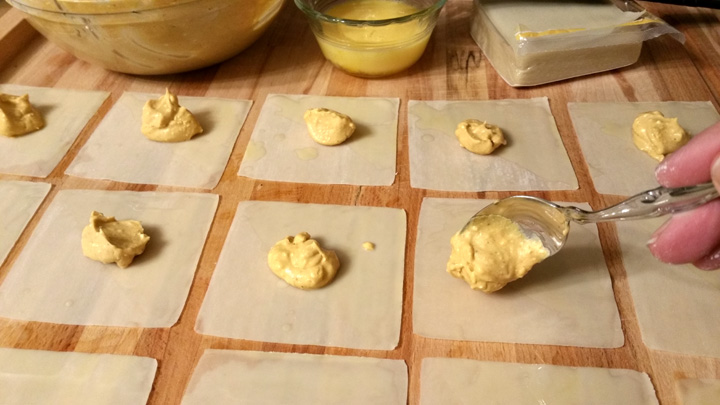 Dollop about a teaspoon of the pumpkin filling in the middle of each wrapper.  Be careful not to add too much, or you will over-fill the wrapper and your wontons will explode. 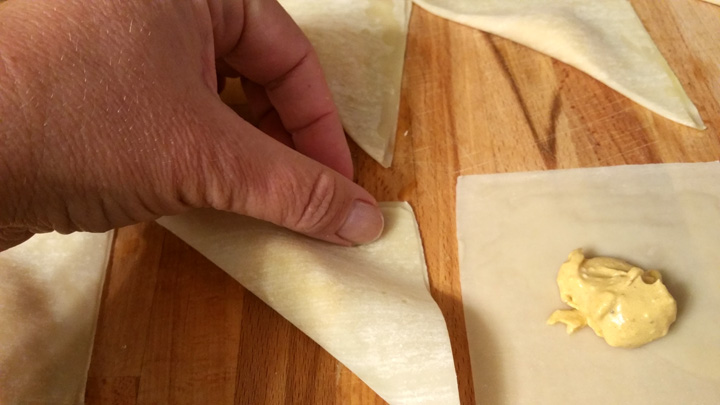 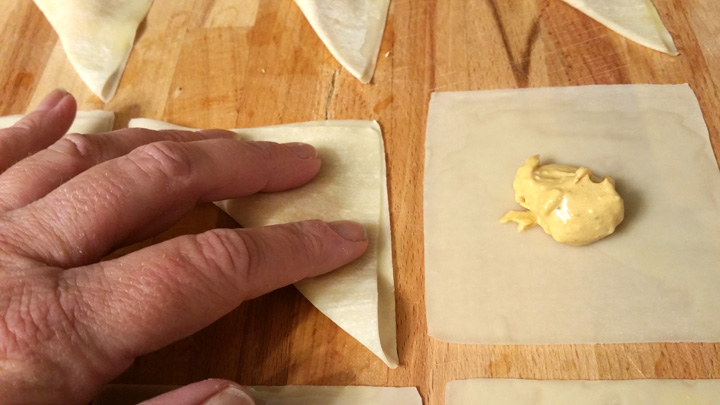 Here’s where I should warn you to quit while you’re ahead.  You can fry them just like this and they will be gorgeous and delicious.  I, however, decided to go for a more fancy-shmancy fold this time.  (You can see the fancy fold I tried below.)  Unfortunately, I discovered this fancy fold caused more filling blow-outs than the normal triangle fold I usually use.  So, the rest of this article will show the wontons with the fancy fold – but trust me, stop at the triangle stage. 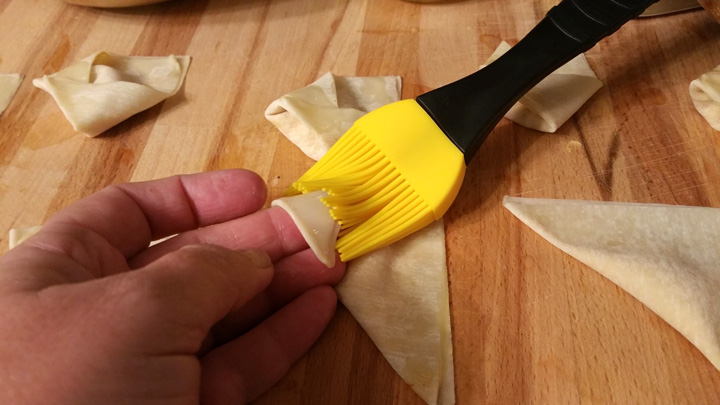 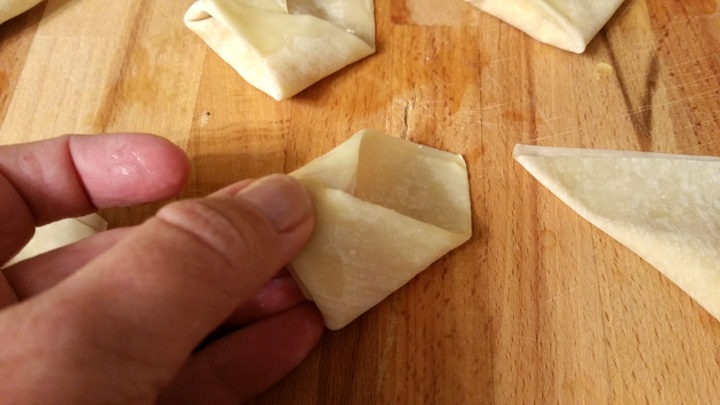 Here’s the fancy-shmancy fold.  Don’t try it.  Trust me.  If I wasn’t so lazy I’d go back and remake these as triangles so I can show pictures of how you should do them.  But that’s just too much work.  And reruns of Hallmark Channel Christmas romance movies are on, so I can’t be bothered. 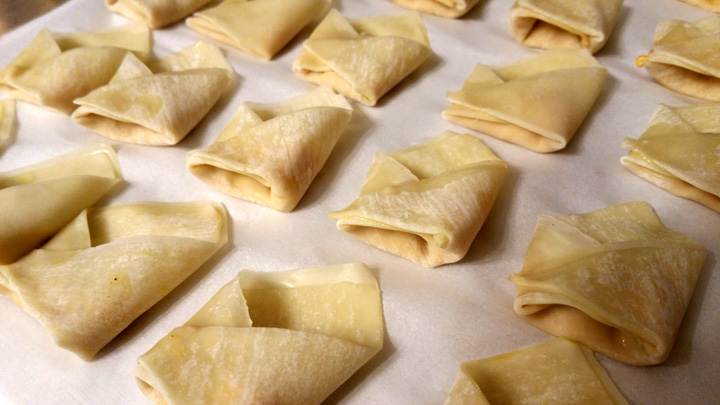 Place the wontons on a parchment lined baking sheet and place them in the fridge while you’re making the glaze.  If you want to make these ahead of time, you can totally place them in the freezer at this stage and fry them frozen a couple days later. 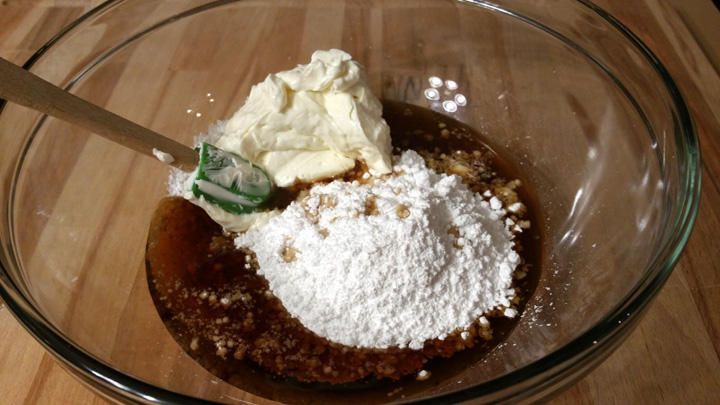 For the glaze, add the warmed cream cheese, powdered sugar, and maple syrup in a medium bowl and mix until combined. 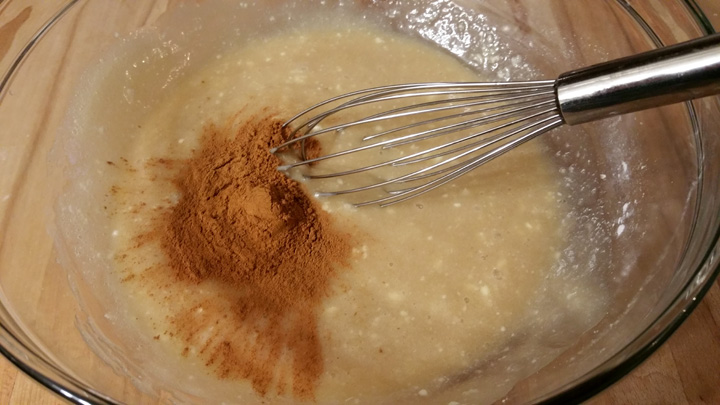 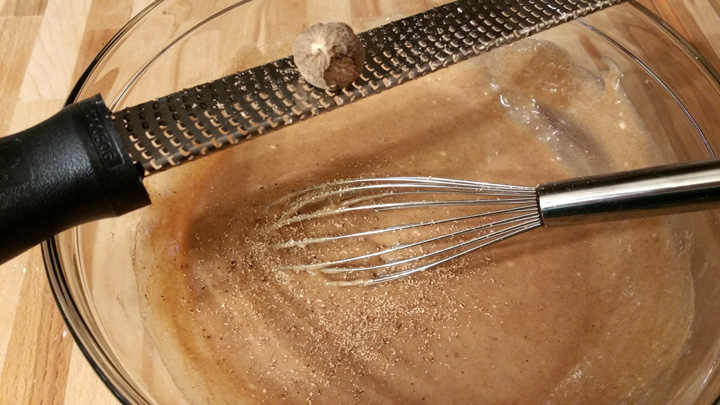 Rasp a nutmeg seed about 5 or 6 times.  Mmmm….freshly grated nutmeg just adds that little sumpn’-sumpn’ that makes it soooooo irresistible.

Seriously – you’re going to want to find other things to use this glaze on.  Like waffles, or cinnamon rolls, or bread pudding. 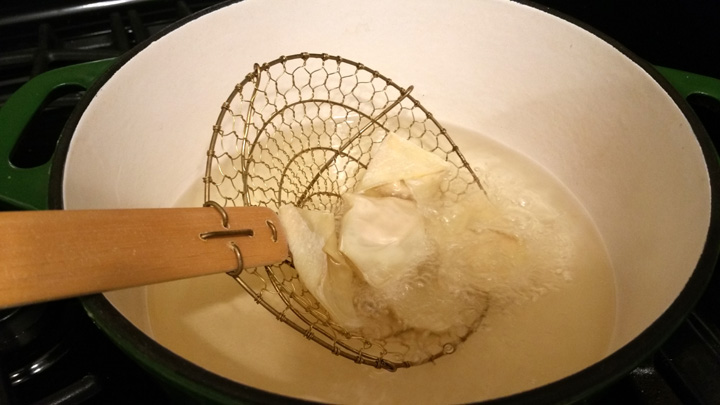 Heat your oil in a high-sided pot, like a Dutch oven, until it reaches about 320 degrees.  Don’t get it too hot or your wontons will burn.  Be sure to use an oil that can withstand high heat.  My favorite is peanut oil.  Fry 5-7 at a time so the wontons don’t get too crowded and the oil doesn’t cool down too much.

A note about frying…  This is NOT the time to walk away from the kitchen.  Keep an eye on the oil, and have some baking soda, or an oil-fire-rated extinguisher close by, just in case.

Fry on the first side for a minute or two until the bottom starts to brown.  Flip each wonton to let it begin to brown on the second side.  Then fish the delicious pillows of crispy, pumpkiny goodness out of the oil and drain them on a stack of paper towels.

These are best when served immediately.  But you can place them on a parchment lined baking sheet and put them in a 200 degree oven as you finish each batch.  That will keep them hot and crispy so you can serve more than 5 at a time.

Serve with a side of maple cinnamon glaze for dipping.

This recipe makes about 60 wontons, and enough glaze for them all.  But if you don’t want to make that many, you can easily halve this recipe to make only 30.  But trust me – they won’t last long, no matter how many you make.

1) Combine room temperature cream cheese with pumpkin pie filling until well combined and smooth.
2) Mix in powdered sugar.
3) Grate in about 10 rasps of a nutmeg seed, then mix until evenly distributed.
4) In a small bowl, beat the egg with a tablespoon of water.
5) Lay out wonton wrappers. Brush 2 edges with egg wash.
6) Place about a teaspoon of filling in the center of each wrapper.
7) Fold wonton into a triangle so the un-eggwashed corner meets the corner with egg wash.
8) Press out all the air and press the wonton edges together so they seal.
9) Place wontons on a parchment lined baking sheet and store in fridge or freezer until ready to cook and serve.
10) When ready to serve, make glaze by combining cream cheese, powdered sugar, and maple syrup in a medium bowl.
11) Add cinnamon, and rasp nutmeg over rasp 5-6 times. Mix until thoroughly combined and smooth.
12) Heat oil in a deep-sided pan or dutch oven until it reaches 320 degrees.
13) Carefully place wontons in hot oil 5-7 at a time.
14) As the bottoms start to brown, flip each wonton to brown the other side.
15) When the second side starts to brown, remove wontons and drain on paper towels.
16) Serve immediately. If you’d like to keep batches warm and serve them all together, place cooked wontons on a baking sheet and place in a 200 degree oven.
17) Serve with a side of maple cinnamon glaze for dipping.