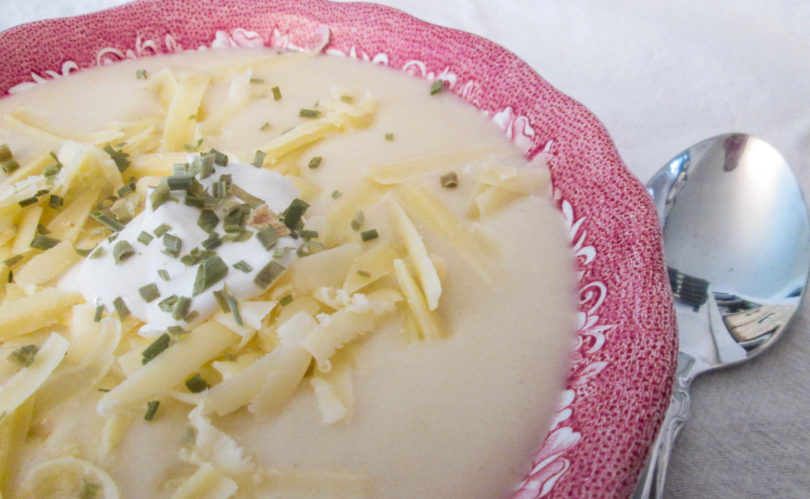 I was at my favorite local market last week and wanted to buy a potato.  Just one.  Not a huge bag.  Not an army’s worth.  Just one lowly little potato for my dinner that night.

As you may know, I prefer to buy organic.  But my market was completely out of individual organic potatoes, and only had the five-pound bag.  So, what’s a single girl to do with five pounds of potatoes?  Make soup! 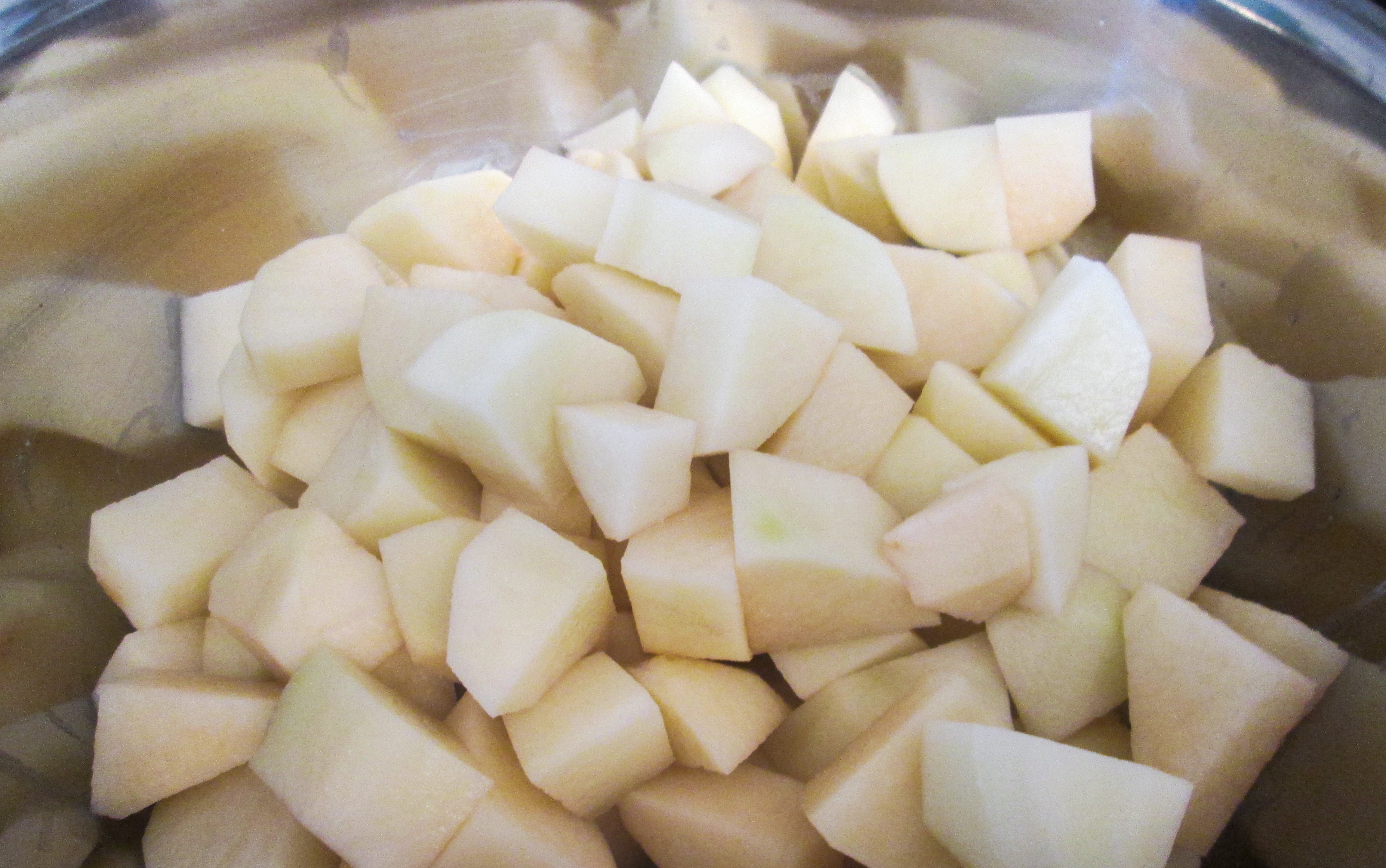 Start by peeling your potatoes and cutting them into small chunks.  The smaller the pieces, the faster they’ll cook.  This is an important detail if you’re super hungry. 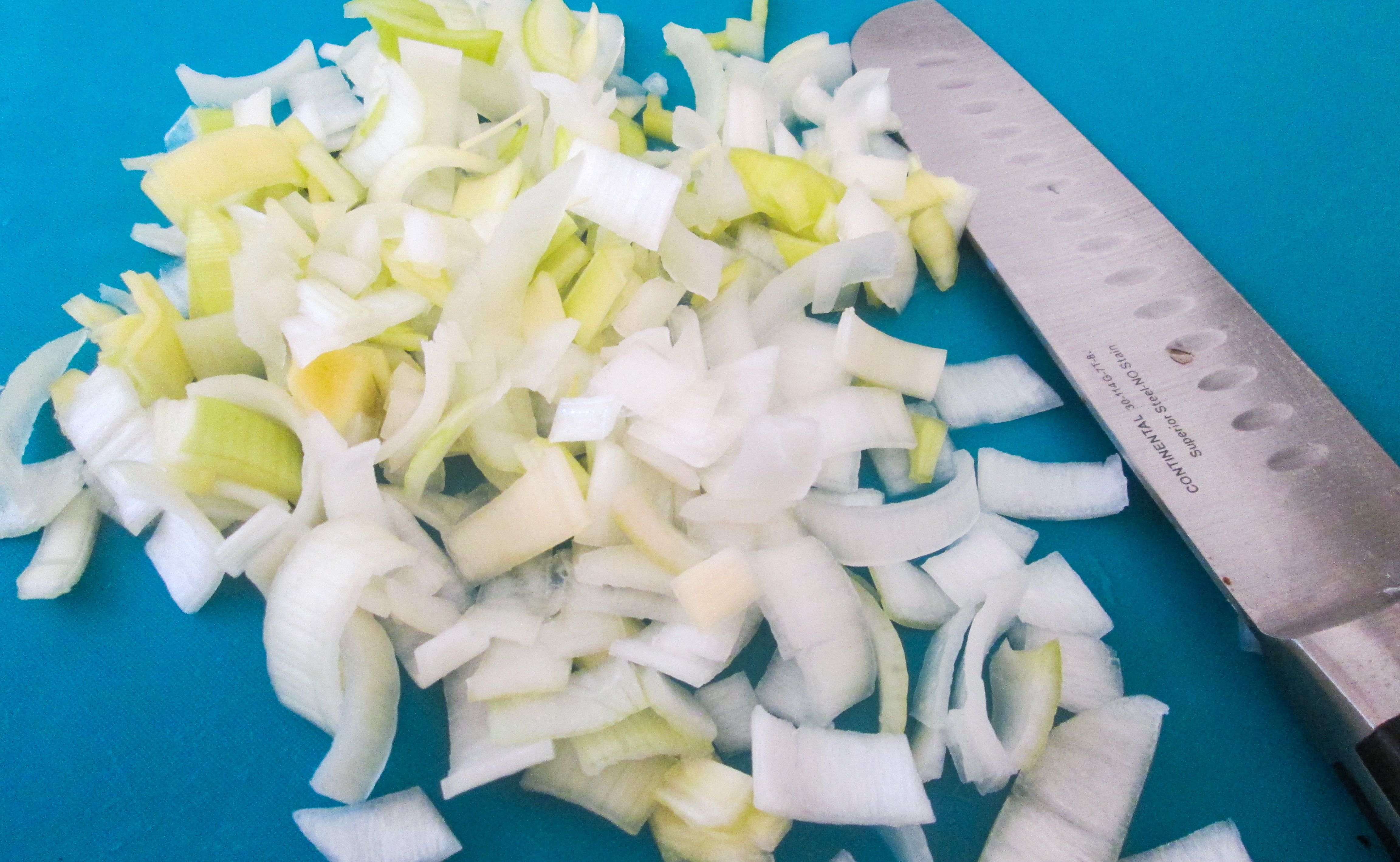 Slice the white and very-light green part of the leeks into small rings, (the darker green parts can get a little tough) then separate the rings into a colander.  Leeks can have sand in between their layers, so you want to make sure you rinse them very well.  Return the rinsed leeks to the cutting board and roughly chop them.  They don’t have to be super small – you’re going to puree them later.

If you’ve never had leeks before, you’re in for a treat!  They’re like a soft-flavored onion, if that makes any sense.  All the lovely flavor of a mild onion, without the bite or heat.  In my opinion, they’re one of the most under-appreciated veggies in the produce section. 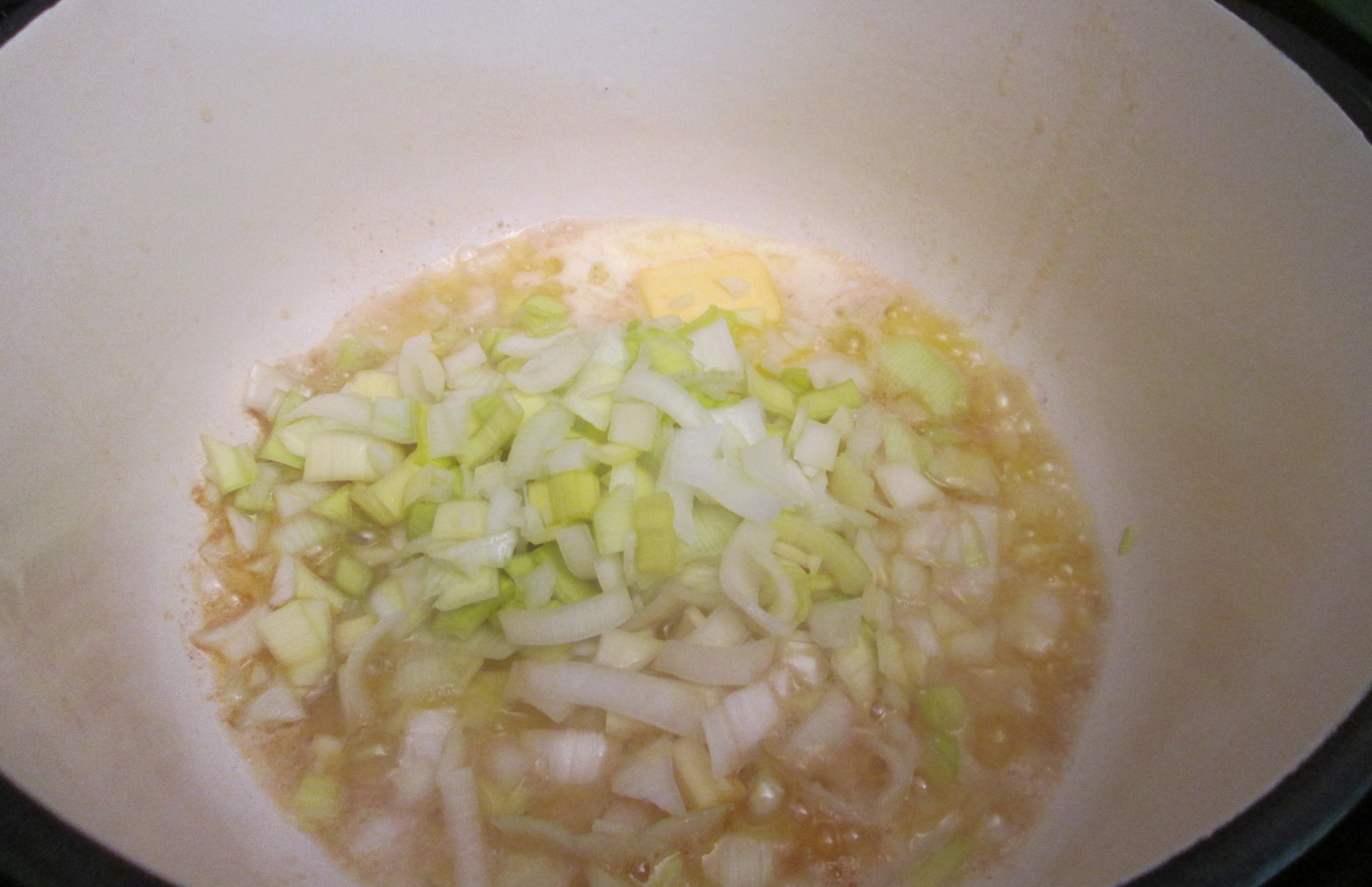 Place the butter in a large-ish stock pot or dutch oven over medium-ish heat so the butter starts to melt.  (Gosh, I’m super technical, huh?)  Add the leeks and saute them, stirring occasionally, until they’re tender.  This will probably take about 10 minutes or so.  If the leeks start turning too brown, reduce the heat to low. 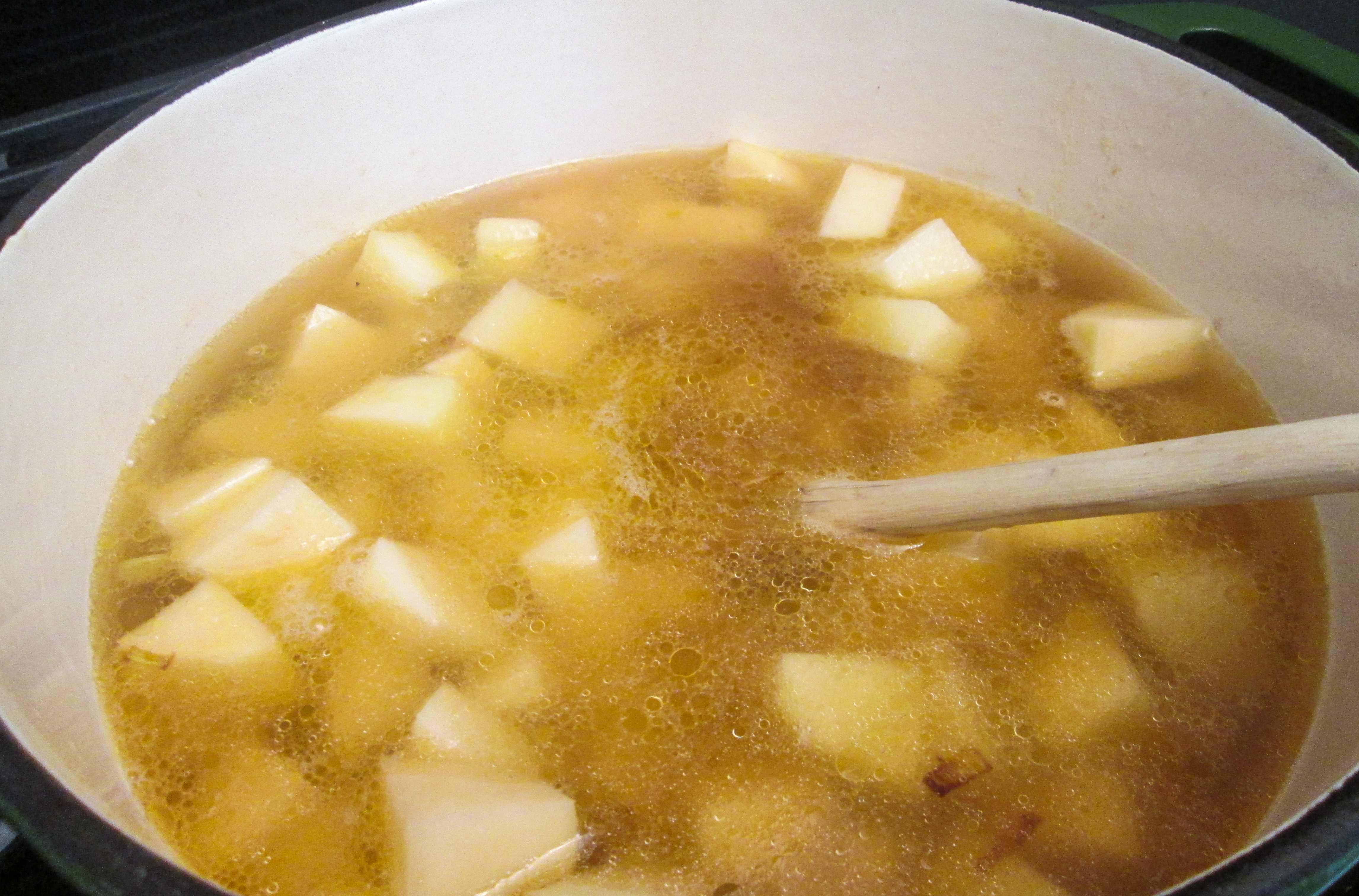 Add the potatoes and chicken stock to the pot.  If you turned the heat down while sauteing the leeks, now’s the time to turn it back up so the chicken stock comes to a soft boil.  Boil until the potatoes are tender.  Depending on how small you cut your potatoes, this could take anywhere from 10-15 minutes. 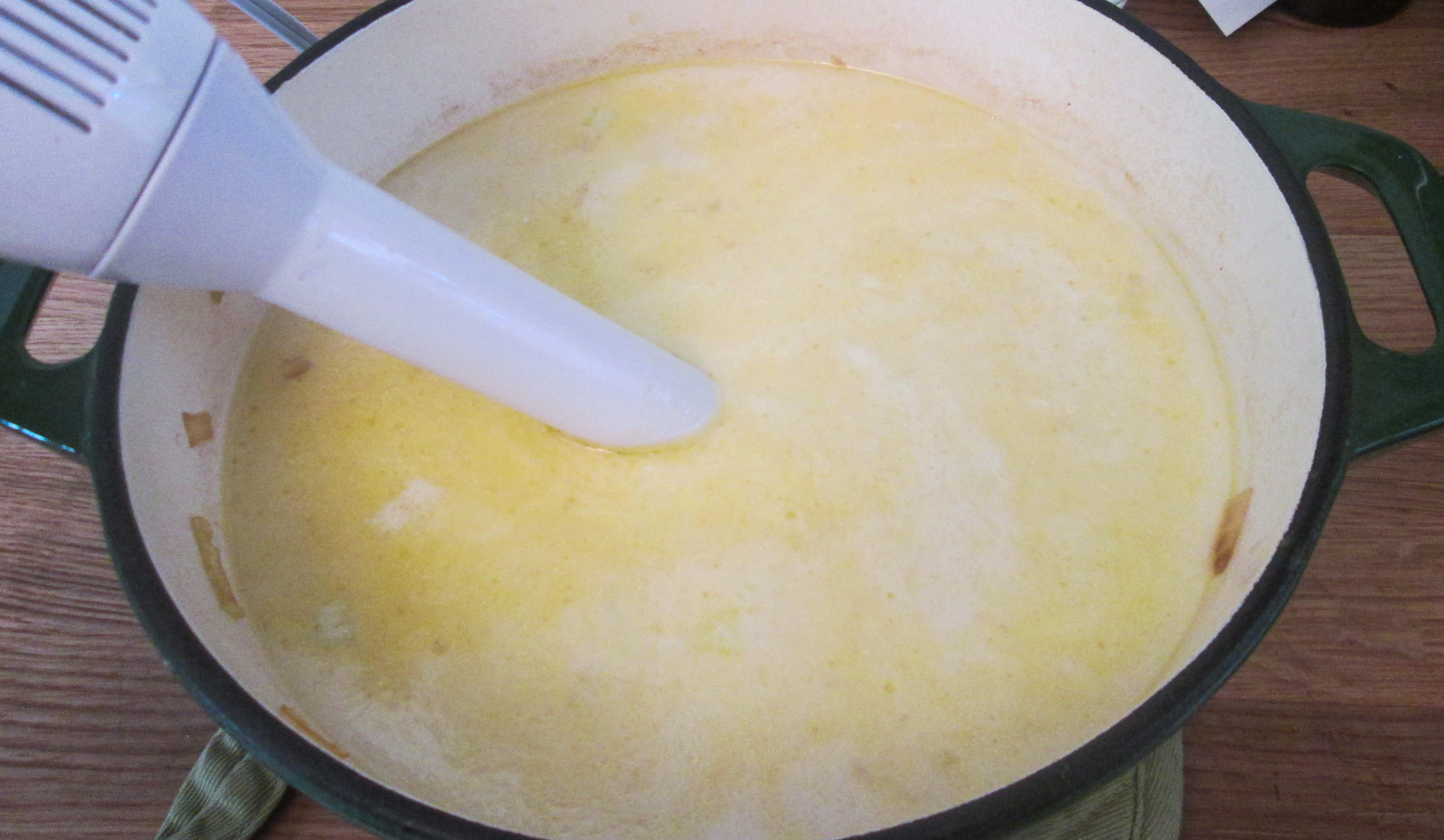 Remove the pot from the heat and add the milk, cream, buttermilk, salt, and pepper.  I used white pepper because I like the look of the soup.  But if you only have black pepper, that’s fine too – you’ll just have black pepper specks in the soup.  So, kinda like confetti.  It’ll be a pepper party.

Use an immersion blender (one of my favorite kitchen gadgets – yes, I’m a kitchen gadget geek) and puree the soup until it’s nice and smooth. 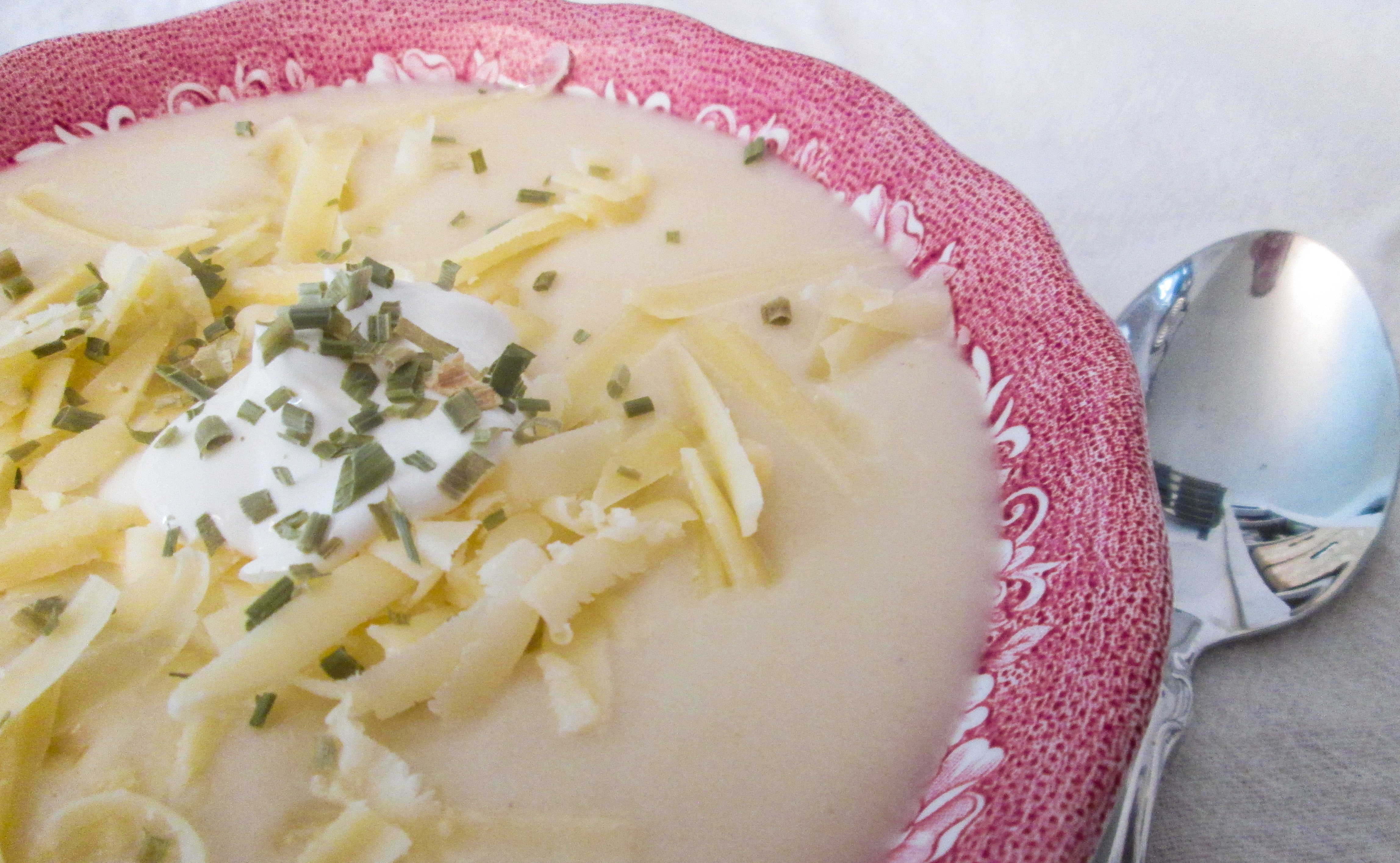 Serve it up with whatever garnish you’d like.  I used shredded cheese, sour cream, and chives here.  But you can use crispy bacon, chopped herbs, crumbled feta, shredded veggies, crispy fried onions – you can see the possibilities are almost endless.

One of my favorite parts of this recipe is that it makes enough to stash some in your fridge and share some with friends.  It’s a soup win-win!