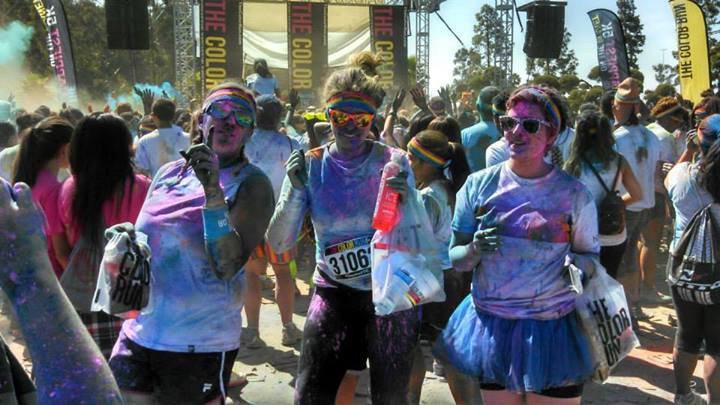 Admit it. You wish you liked running. Girls who run look so fit and have so much energy and just seem so cool…. And then Netflix reminds you that “Unbreakable Kimmy Schmidt” is pretty neat, too. And maybe a rewatch of “Mean Girls” would be wise, you know, to keep this whole “cool” thing in perspective. After all, gotta rest up in order to have energy for a work out, right?

Then again, maybe it’s just me.

They say running is the ideal exercise. Not only is it the most efficient way to burn calories, but you don’t need a gym membership or a workout buddy to make it happen. As a bonus, you’ll be prepared for that zombie apocalypse everyone keeps talking about. Or, at the very least, have endurance for those extreme Black Friday sales.

If you’re like me, running alone week after week gets boring. I need an extra push to stay motivated and on track. That’s why I was intrigued by The Color Run.

First, I needed a goal. Once I paid my registration fee, I was committed. I refuse to waste money, so there’s no way I would flake out. Recruiting a couple of friends for the adventure made all the difference. Accountability was really helpful, plus more was definitely merrier in this case.

I knew I wouldn’t be able to jump up and run 5k (3.1 miles) right away. I used an app called Couch to 5k [http://www.active.com/mobile/couch-to-5k-app], and it was incredibly transformative. It starts with a mix of (mostly) walking and a little jogging, then leads up to being able to run non-stop for 30 minutes. That’s something I never thought I had in me. Was it hard work? Oh, yes. But, without out a doubt, it was worth every step and much more manageable than expected.

Finally, it was Color Run day!

The choice of running attire is very important. We saw people of all ages running (and walking) the course. While a few folks kept it traditional with shorts and a t-shirt, others went all out with tutus and crazy hats. I decided my rainbow star socks were colorful enough, considering what was to come.

At the start of the course, it gets a little crazy with so many people! But, it didn’t take long for the herd to thin out as everyone kept their own pace. The atmosphere was cheerful and friendly. Everyone was there to have fun and encourage each other. Be prepared for high fives from strangers!

Color brigades are stationed along the trail, ready to cover you in colored powder! It’s cornstarch-based and totally non-toxic, but I was very glad for the sunglasses that protected my eyes. Sweating in the summer sun made for some interesting blends and streaks. However, getting messy is what makes this different from your morning jog around the neighborhood.

We finished the 5k in about 45 minutes, which wasn’t bad for my first real run, including some pauses at the color stations. Next, it’s time to join the party!

Wanna try the Color Run? This year’s info is at thecolorrun.com. Keep an eye on sites like Groupon and Living Social for good deals on registration or other fun runs in your area. While I recommend doing this event with a friend or two, everyone’s so welcoming that a single runner might not remain solo for long!

(Notice the different shirt? Yes, I had so much fun, I did it again!)