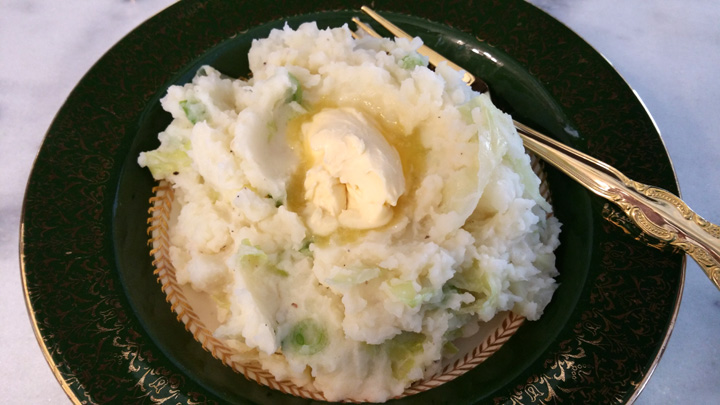 What kind of Irish girl would I be if I didn’t post a Colcannon recipe in honor of St. Patrick’s day?

I have never met a potato I didn’t like.  I blame it on my Irish ancestry, since historically potatoes have been a primary component of the Irish diet.  In today’s globalized marketplace, the Irish palate has expanded significantly.  But there still exists a fondness for the spud deep inside every Irish girl’s heart.

Cabbage and onions have been a part of Ireland’s food history since the Iron Age.  And when potatoes were introduced to Europe in the 1500s, those progressive Irish were among the first to embrace the culinary curiosity.   It quickly became a staple on the Irish dinner table because it was filling and the ingredients were inexpensive.

The great thing about potato dishes for single girls is that cooked potatoes can be kept in the fridge for days, or in the freezer for weeks.  After I make a big pot of Colcannon, and gorge on as much of the fresh treat as my tummy can handle, I package the rest into single-serving portions.  From there they can be used in soups, as toppings on shepherd’s pies, as savory potato pancakes, or just reheated and eaten in its original form.  (Keep an eye on this website for all these recipes soon!)

There are many versions of Colcannon, and every family has their own special recipe.  But there are three major component in every Colcannon; Potatoes, Cabbage, and some member of the onion family (leek, scallion, onion, shallot, etc.).  Some recipes even call for ham, bacon, cheese, or sour cream.  Bottom line here: do what you want.  Here’s my basic recipe.  Take it and make it your own.

If you’re Irish through-and-through, or just Irish for the day, join me in savoring one of the gastronomic delights of being Irish.

Start with 3-4 pounds of organic russet potatoes.  Peel the potatoes and cut them into 2-inch chunks.  This will help them cook faster, and I’m all about instant gratification.

Remove the core from the cabbage and slice the leaves into thin strips.  I chop the cabbage even further than what’s picture here.  I don’t like huge chunks of cabbage in my Colcannon.

Slice the green onions into thin round rings.  I like the dark green parts, too, so I chop all the way up the stalk until the greens start to get ooky.  (That’s a technical term.  Ooky = mashed, slimy, dirty, yucky.)

Place the cabbage in a deep-sided sauté pan and cover with hot water.  Bring to a soft boil and cook for 3-4 minutes until cabbage has wilted.

Drain the cabbage thoroughly until all water is removed.  Return to pan and add 3 tablespoons of butter.  Cover and let butter melt into cabbage until potatoes are done.

When potatoes are done, drain them then put them back in the hot pot and add the milk and 3 tablespoons of butter.  Mash potatoes with a masher until they’re smooth and the butter is melted.  It helps if the milk is warmed a bit before it’s added to the potatoes.

Mix in the cabbage and scallions.  Salt and pepper to taste.

And now the best part.  Spoon a heaping mound of this mouth-watering creation into a single-size serving dish.  Make a well in the center and place another tablespoon of butter.  (Can there every be too much butter on mashed potatoes?  I think not.)

Instructions
1) Peel potatoes, chop into 2-inch cubes, and boil until soft.
2) Remove core from cabbage and slice leaves into strips
3) Boil cabbage for 3-4 minutes or until soft
4) Drain cabbage, return to sauce pan, add 3 tablespoons butter, and cover until potatoes are done.
5) Drain potatoes and return to hot pot.
6) Add warm milk and remaining 3 tablespoons of butter.
7) Mash potatoes with hand-held potato masher (don’t blend or whip) until smooth.
8) Mix in cabbage and scallions.  Add salt and pepper to taste.
9) Serve with a pat of butter in the middle of each serving.